Cokie Lepinski, Head Coach of the Swymnut Masters has built two Masters teams from the ground up. 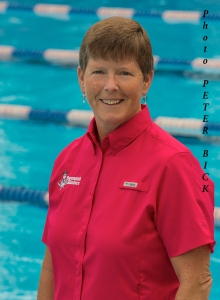 Cokie writes regularly for U.S. Masters Swimming, is Vice Chair of the Coaches Committee (and former Coaches Chair for Pacific Masters Swimming) and was the 2014 USMS Coach of The Year. She is a USMS Level 4 certified coach who is very passionate about technique and committed to making sure swimming is fun and sustainable as a life long pursuit. She has authored an e-book, “There’s A Drill For That” on swim drills for all strokes.

She loves to compete in both pool meets and open water events and holds Pacific Masters and National records in breaststroke.

She is an award winning coach whose passion for swimming is all encompassing. In 2014 she was named the U.S. Masters Swimming Coach of The Year! Not only does she love to compete, she loves even more to coach and to be involved in the administrative side of Masters swimming, serving locally with Pacific Masters and on the national level with U.S. Masters Swimming. Her awards include the:

She was one of four coaches to serve as the National Team Coach for the 2010 FINA World Masters in Sweden and served two years with the USMS High Performance Camp (in 2012 and 2013 where she was the Head Coach).

Find our more about Cokie online!